Last week the PyLadies took Portland, Oregon by storm: after months of planning, brainstorming, planning, rehearsing, and even a bit of planning, we flew in en masse to DjangoCon 2011 for six action-packed days of tutorials, talks, code sprints, and raucous socializing with Django developers from all over the world.

Most of the talks from DjangoCon will be available online soon (we hope!) - lots of slides and other docs are available via Lanyrd. Here’s a brief recap of how the PyLadies represented last week:

On Monday we labored through a pre-conference day of tutorials to help PyDanny lead the Ultimate Django Tutorial, all proceeds from which went directly to the PyLadies. We had invaluable assistance from other great mentors like DSF president Russell Keith-Magee and Gabriel Grant of DotCloud, to name just two. 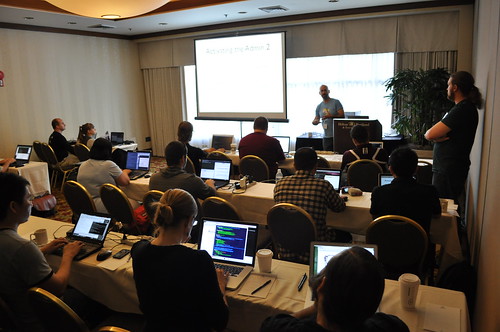 The conference began in earnest on Tuesday, with Tracy delivering an inspiring talk about launching her own startup in six weeks by teaching herself Django. That afternoon, Sandy wowed even the most experienced developers in the room with her excellent talk on best practices in testing. Audrey and Christine picked up the PyLadies baton the following day, with talks about Django packages and Django for the Front-End, respectively. Katharine spoke on Wednesday afternoon about web-scraping methods.

I’m singling out the PyLadies-driven sessions specially here, but of course there were numerous other great technical talks on topics ranging from design (Idan Gazit), to security issues (Paul McMillan), to pouring out some good-natured haterade for  our favorite framework and language (Glyph Lefkowitz’s memorable keynote was entitled: “Why does Django Hate Python”?).

Most of us were heavily sleep-deprived by Friday – thank heaven for Stumptown Roasters and Voodoo Doughnuts! Still, inspired by Steve Holden’s and James Bennett’s respective talks about Django’s documentation, a few PyLadies delegates got together with a number of other devs at Urban Airship for code sprints, to try and rework the official Django tutorial so that it would be more friendly to beginners and casual Djangologists. Nate Aune started a git repo for the project and we hope to continue to plug away at it even though the conference is over.  Still, while coding remotely has its pros, it was pretty awesome to be able to sit in the same room with dozens of talented folks to plug away at the same open-source project! 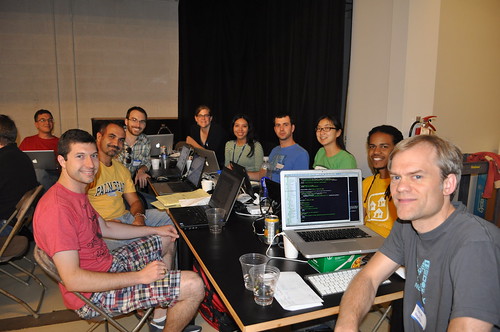 It wasn’t all work for us, of course – there was plenty of extra-curricular fun to be had in Portland, from printing and selling out our Djangsta shirts (conceived by Katharine and designed by Christine); to sneaking multiple trips to Powell’s Books and Portland’s famous food carts (deep fried pie FTW!!); to hosting a meetup for DjangoCon PyLadies/friends-of-PyLadies at McMeanamin’s Pub on night 2 of the conference. Emma Email Marketing pitched in for generous quantities of beer for us, and we are indebted to Portland PyLady Michelle for organizing this hugely successful get-together!

The best part about the conference, of course, was meeting, coding, and carousing with Django devs from all over the world, many of whom we’d first conversed with online, via IRC or Twitter. There seemed to be a fair amount of conference buzz circulating about the PyLadies even before we arrived; what an odd feeling it was to have strangers recognize me by my Twitter avatar – not to mention how odd it felt to introduce myself to others whom I’d recognized in the same manner!

Speaking of which: the background tweet-chatter and retweeting of points from sessions we were missing out on was great to follow, sure, but Twitter was also awesome for things like helping out PyLady Dana when she was having some trouble getting PostgreSQL running on her MacBook Pro, or for reserving Djangsta shirts before they sold out.

Special props go to Shinji and Emily, who used Twitter to reach out to us and find their way into the conference after I tweeted a call for applicants. We’re so excited that people like them are taking the initiative to start PyLadies (or similar) groups all over the country!

Help from our friends

Most of this would have been inconceivable without the incredible amount of support we received from a few great people and their companies – and all we had to do was ask! You can read the full report of the results of our DjangoCon sponsorship program, but suffice it to say here that we were overwhelmed by the response.

We also have to acknowledge the exceptional hospitality of the conference organizers, including Steve, Sean O'Connor, and Nancy Asche, who lavished the PyLadies with care & attention, using every possible opportunity to demonstrate their commitment to seeing diversity flourish in the Python community. It was especially awesome of them to have arranged the weather in Portland to be unseasonably pleasant for us out-of-towners ;)

**Big hugs to everyone** who came up to us offering support, tips, or twenties (for the shirts!). It’s really exciting to connect with others who want to join us in our efforts to promote Python and open source, and do their part to increase the overall diversity of our community!

We plan to put the money we earned from the tutorials and T-shirt sales toward establishing the PyLadies as a 501©3 non-profit organization so that we can continue to do the things we’ve been doing for a long time to come.

All in all, I left Portland feeling inspired by the openness, intelligence, and big-heartedness of the Django community, and I know I’m not the only one.