How to hook people on CS through Magic

Thanks to Katie Cunningham of Tucson for letting us copy this post from her blog!

For several months, I always carried a deck of cards in my backpack. I like playing gin rummy as much as anyone, but that’s not the reason why. I carried them because I had discovered Computer Science Outreach Magic.

I learned a Computer Science magic trick from cs4fn.org/magic, and I’ve been hooked ever since. I’ve performed this trick to much success when manning booths at outreach events and teacher visiting days. It lets you engage people while illustrating a bit of computer science. At the PyLadies' lunch at PyCon ‘13, Esther Nam convinced me to write a blog post about this card trick I was so excited about. “Lots of people want to know how to demonstrate computer science without a computer!” she said. 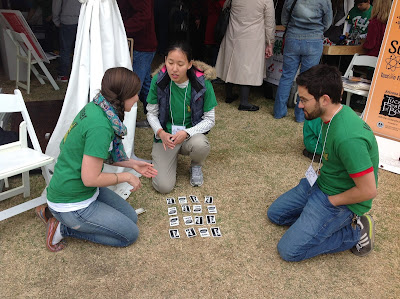 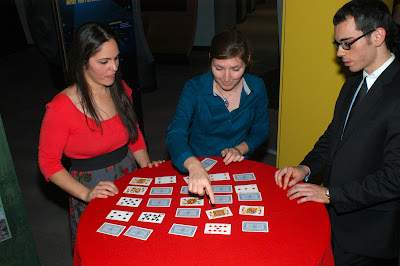 That’s exactly why I love this trick. It’s portable, it’s easy, and it doesn’t use a computer. It allows people to see an easily digestible example of the logic, discrete math, and information that is at the core of Computer Science. For people who aren’t impressed by physical computers or cryptic terminal windows, this can really be a draw.

“[Computer science] is not really about computers – and it’s not about computers in the same sense that physics is not really about particle accelerators, and biology is not about microscopes and Petri dishes…. Now the reason that we think computer science is about computers is pretty much the same reason that the Egyptians thought geometry was about surveying instruments: when some field is just getting started and you don’t really understand it very well, it’s very easy to confuse the essence of what you’re doing with the tools that you use.” - Hal Abelson (1986)

The cards need to be put down seemingly without thought, like the assistant is just adding the extra row and column randomly. Here’s a walkthrough: 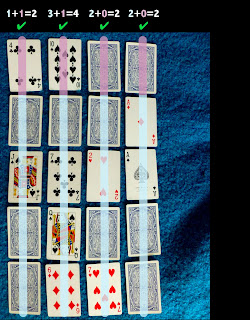 Add a parity bit to all of the rows, including the row you just added. (Notice that the column you are adding has parity automatically.) 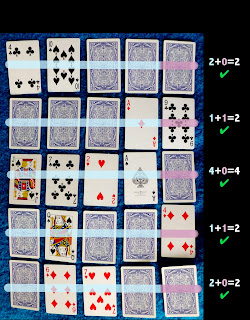 Now when the learner flips a card, the row and column of the card that was flipped have an odd number of face up cards! You can quickly find the flipped card, even though you’ve never seen the grid before. 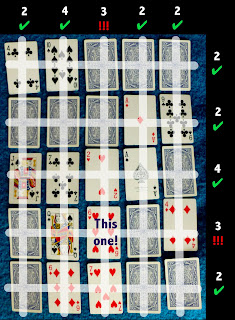 It works just as well when the flipped card is in the parity row or column. 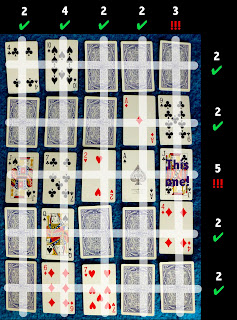 The kids at the CSUnplugged show figured it out on their own, I was very impressed. The presenters used this trick as their opening act, and then explained it at the very end, so the kids had some time to think about it. If you want to see their explanation, check out this video

Make sure the learner really understands by putting the cards back into their parity’d state and asking him to close his eyes and guess which card his friend flipped. This is demoed in the video above. If you have more time for more than a quick wow moment, you can ask the learner:

I’m sure you are excited now to show this trick to all your friends. With this trick in your pocket, every person becomes someone you can impress with computer science! You’ll live for the stunned look on people’s faces when you pick the right card! 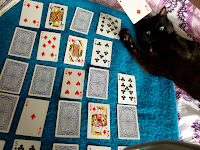 Practice with your cat! And people.

I like doing this trick with cards because cards are easy to get my hands on when I’m inspired to perform. Usually I have limited table space, so it’s hard to squeeze in more cards than I have described. In the CSUnplugged version, they start with a larger grid and black and white squares. (Note that it doesn’t matter how big your grid is – the trick works the same.) They also had the nifty idea to make them magnetic so the trick can be performed on a whiteboard.

CSUnplugged has the magician add the extra row, eliminating the assistant. I like having the assistant better, because the magician’s reveal is more impressive, since clearly no memorization is done – the magician hasn’t seen the cards at all! Also, when a little kid is the learner, the assistant is necessary to make sure he or she puts down the cards correctly and flips only one card. But for a demonstration in front of a classroom or when you’re alone, it’s worth thinking about.

Find the original cs4fn version of the trick on page 25 here: http://www.cs4fn.org/magic/downloads/cs4fnmagicbook1.pdf. They add the extra row based on face down cards instead of face up cards. It doesn’t matter really of course – do what’s easier to see quickly. Or if you change the size of the grid to have an even number of rows and columns at the end of the trick, it doesn’t matter! Face up and face down will both have to be even or odd.

P.s. Now that you are using this trick, you have to watch out for Magnita Makov, world’s greatest magician.

Good luck! Go forth and impress all your friends!!!

A big thanks to Daniel Harms for helping me improve this trick :)